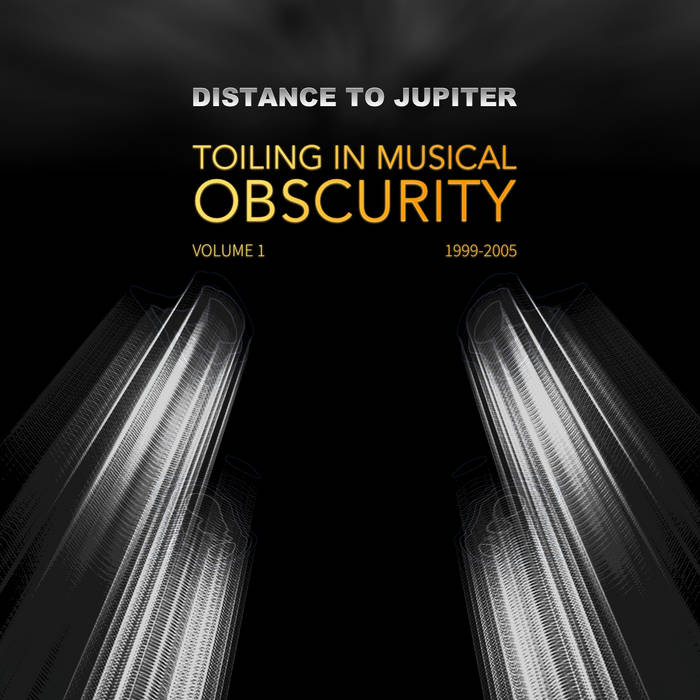 I first met Pete Muller (ff.moobaa.com) in the hallowed YakYak forum, the virtual home of Jeff Minter and Llamasoft back in the late 1990s. Pete hails from Adelaide, Australia, where he's been consuming whatever the fringe has to offer for years (and by "fringe" I mean the Adelaide Fringe, which is the largest annual arts festival in the Southern Hemisphere, held in the South Australian capital of Adelaide). Pete is a prolific writer, blogging at length about his consumption of Art year after year, and fittingly, somewhere along the way, he became interested in Distance to Jupiter - which is about as fringe as it gets (though at the time, this music was outsider music, at best; arguably, it still is). Now many years later, Pete probably possesses more rare editions of Distance to Jupiter albums than anyone else on the planet. That said, back in 2007, Pete compiled the list of tracks you see above. For him, these were Distance to Jupiter's "greatest hits" during the period 1999-2005, and his choices surprised me in multiple ways (had I been the one crafting this compilation, several of these tracks wouldn't be anywhere near it). Obviously, Pete had concerns: Would these tracks all fit on a standard audio CD? Yes. Would these tracks suitably represent the albums they were taken from? They do. But for me, this compilation is vital to gaining an understanding of this strange body of work. I've realized that Pete - so attuned to the fringe - is seeing/hearing things that I was unaware of when crafting this music, and that's always a pleasant surprise for an artist. Think of this list as a set of skeleton keys for the 11 albums represented. They unlock a prolific period in the history of Distance to Jupiter - a period in which every single track (120 of them, possibly more) is a live performance, recorded direct to MiniDisc. Perhaps this helps explain how 11 albums came to be in six short years (no time-wasting do-overs, no endless tinkering in software; just one performance leading to the next). I tend to characterize these tracks using simple words like abrasive, dissonant, challenging, and haunting, but I'll let Pete describe this compilation, as he did in his email from 2007:

"'Message' is still a natural opener, and the flow through to 'Alone' was too good to miss. 'Alone' also sets an unnerving tone to the compilation, something which I tried to foster through equal parts ambiance and beats. Likewise, the transition to 'Outward' was just too good to avoid; it also allows for an up-tempo transition. Whack in 'Move', it goes with the groove, but with sufficiently different instrumentation. Drop back down to a gentle 'Collapstar' which trades some speed and abrasion for a touch of sweetness, before a mildly worrying edge. Forget the worry: now just bliss out with 'Galileo'. Reflect in a maudlin manner with 'Red', then push through the shadowy branches of 'Pluto'. Suddenly, we're in the open: 'Turn' is crystal-clear; it knows exactly what it's doing. It's a gear-change for the mind as, rather than creeping along in our own heads, we're grabbed by the hand and told where to go. We're led through the rains and portent in 'October', before being scraped through an uncomfortable memory with 'Transform (Fragment)'. And now we're into the heft, the weight. The meat. Straight into the simmering opus of 'Gundam'. It bubbles away, poking without intent at the mind. 'Firmament' provides the perfect backdrop to reflect upon that which has gone before. 'Infinite Unknowable Abyss' activates the brain once more, seemingly innocuous soundscapes that suddenly dissolve to a land of menace before returning us to safety - or not? As the rumbling conclusion is inconclusive, we rely on 'Ohm' for context: gritty excitement, constantly on the edge of our seats. Oh yes. 'Crate' lulls in with a half-drunken swagger, before organizing itself into an assertive direction. Showing no sense of urgency, it pointedly indicates how we should be packing our bags and sends us home with 'Overdrive' - which is just a fucking magnificent track." -Pete Muller, May 27th, 2007.

Though Pete later remarked "...this reads like A-Grade Wank" he was just being even-handed with that comment. His descriptions of these tracks manage to encapsulate and represent the albums from this period in a way I had failed to do time and again, and I have to admit, the playlist has grown on me quite a bit! Hopefully, Pete has some thoughts about "Toiling in Obscurity, Volume 2: 2006-2012" which will hopefully be pulled together and released in the near future.

All tracks composed and performed by James Kracht.